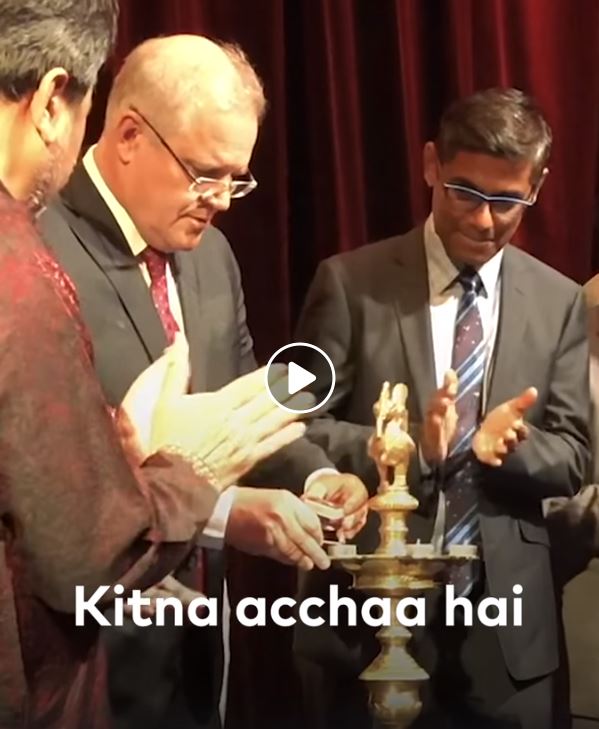 The "Christian" Prime Minister of Australia, Scott Morrison (ScoMo) wishes us Happy Diwali! A celebration of light conquering over darkness, it sounds familiar, even Biblical (Genesis 1:3), but is it another compromise? Perhaps it's Hinduism!

Namaste to everyone celebrating Diwali this year.

I love it because it celebrates the values and beliefs we all share.

(Mr. Morrison has a flower wreath put over his neck)

The festival of lights is also an opportunity to reflect on the blessings that we share in this wonderful country.

Australia is the most successful multicultural society anywhere on the planet.

And it's a place where all people of all backgrounds, and cultures and faiths live together in remarkable harmony.

So this Diwali, we celebrate and savour all of the blessings in our lives.

I want to wish everyone celebrating this great festival of lights a very happy Diwali.

So, what's the problem?

Put simply, this isn't Biblical Christianity on display. "Well derrr", you might say!

Scott Morrison has claimed to be a Pentecostal Christian, attends a Christian church in Sydney, is mates with many high profile "christian" leaders within the Australian community.

Lighting of candles. The "Christian" Catholic Church does this too. So, again what is the problem?

This is what our "christian" Prime Minister just did, or allowed himself to do, willingly, self-endorsed and authorised.

Every object associated with the ritual of a Puja or worship is symbolically significant. The statue or image of the deity, which is called Vigraha (combination of the Sanskrit words: vi and graha). Vigraha means something that is devoid of the ill effects of the planets (or grahas). The flower that is offered to the deity stands for the good that has blossomed in the worshipper. The offered fruits symbolize detachment, self-sacrifice, and surrender. The incense burned stands for the desire for various things in life. The lamp that is lit represents the light in each person, which is the soul that is offered to the Absolute. The vermilion or red powder stands for our emotions.

Krishna is generally depicted with peacock feathers adorning his head. Lakshmi, the consort of Vishnu, is the goddess of prosperity, luck and beauty; she is symbolized by the mayura. Mayuresvara an incarnation of Ganesha, whose mount is a peacock (in the Ganesha Purana)

Kartikeya (IAST: Kārttikeya), also known as Murugan, Skanda, Kumara, and Subrahmanya, is the Hindu god of war. ... The iconography of Kartikeya varies significantly; he is typically represented as an ever-youthful man, riding or near a peacock, dressed with weapons sometimes near a rooster.

Mr. Morrison has just worshipped at a pagan altar of Hinduism! He also authorised himselft to publically do this before the Australian community, before the world. He has just visually and verbally confirmed to everyone, that it is okay to compromise on our personal Christian faith.

Scott Morrison just made the revelation of Jesus Christ a little thing, that is a significant compromise. What Mr. Morrison has done is not a small thing.

You shall have no other gods before me.

Mr. Morrison, that is God's law. I now invite you to grab your Bible and read Hebrews chapter 1 (Hebrews 1).

Being then God’s offspring, we ought not to think that the divine being is like gold or silver or stone, an image formed by the art and imagination of man. The times of ignorance God overlooked, but now he commands all people everywhere to repent, because he has fixed a day on which he will judge the world in righteousness by a man whom he has appointed; and of this he has given assurance to all by raising him (Jesus) from the dead.”

Scripture quotations are from the ESV® Bible (The Holy Bible, English Standard Version®), copyright © 2001 by Crossway, a publishing ministry of Good News Publishers. Used by permission. All rights reserved.